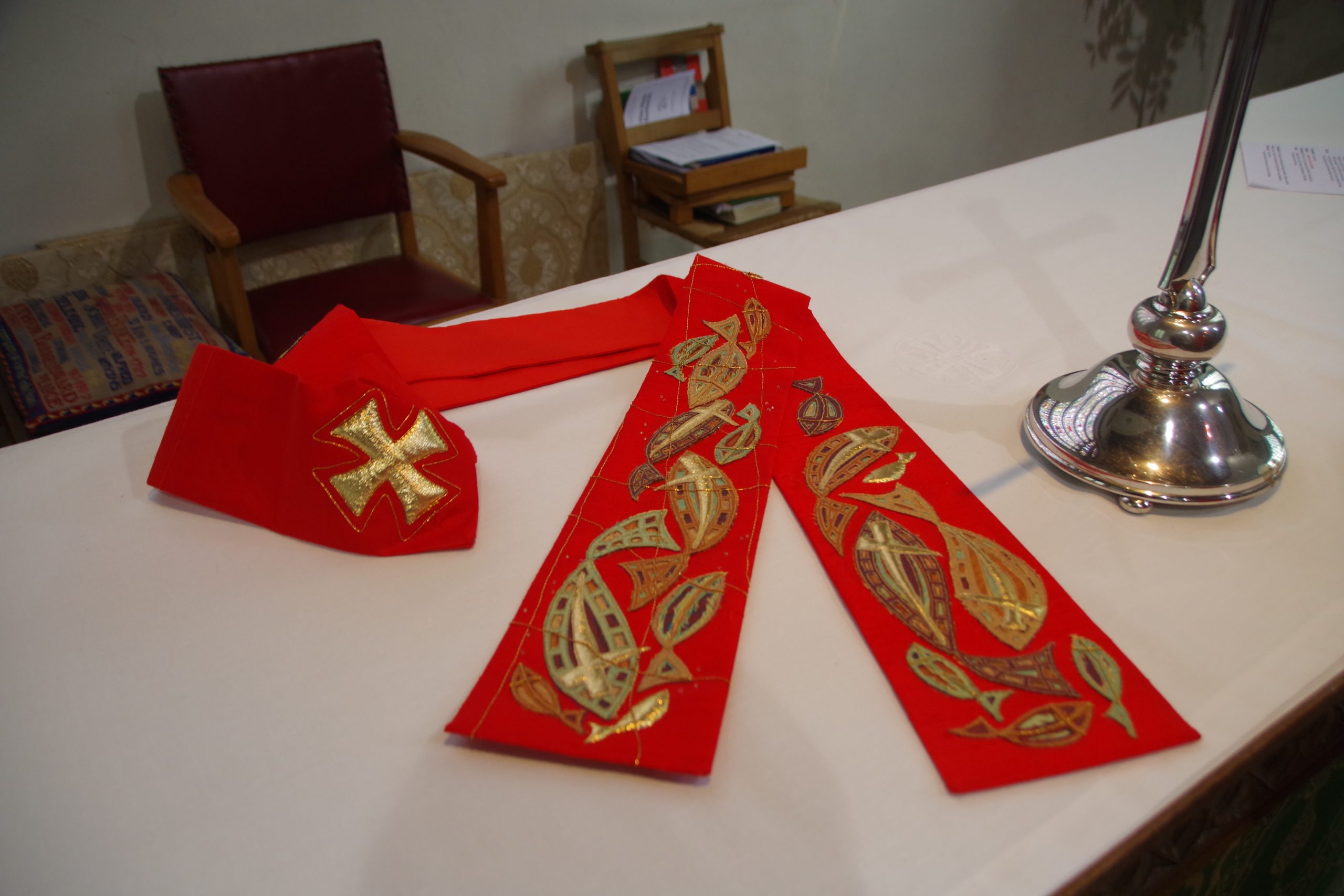 This is my very first stole!
I was asked back in January this year if I would think about making my sister’s ordination stole. I was, at first, very honoured, then the panic set in!
I had never done anything like this before and it was such an important thing, I had to get it right.
I began by talking to her about the symbols she would like, ‘fish’ I was told. Free swimming on one side and caught in a net on the other. I sketched a couple of ideas for her and eventually we had a design she was happy with.
After an exciting trip to Borovick’s in London to choose the silks, I created a few of the fish so that she could see how they would be made. I used a technique called ‘reverse applique’ where I layer four pieces of silk, one on top of the other, tack a traced fish to the reverse and then zig-zag stitch to create the fish shape. Once stitched the tracing paper is removed and each fish is cut out. I then cut through to reveal the different colours underneath.SLXLM

​​
There is also a deliberate element of fraying to each fish, which I think gives another dimension to the design. Once the ‘shoal’ was finished they were hand appliqued on to the stole. On each side is a tiny gold fish, created using a goldwork technique of layering cut felt shapes, that decrease in size, on to the stole. Stitching them down with tiny stitches and then covering them with the finished fish shape, cut from gold kid leather. This is then stitched down using an incredibly fine needle, so as not to tear the leather. This creates a soft domed effect, giving another dimension to the stole.
MXLLS

​​The net was created using couched gold Jap thread and then some tiny seed beads were added as ‘bubbles’. The stole was then constructed using a red cotton backing fabric, sandwiched between the layers of silk and cotton is an interfacing, signed with messages of love from friends and family, it is just about visible to the naked eye if the stole is held up to the light. At the nape of the neck is a gold cross, this was created using gold kid leather, padded with layers of felt and outlined with couched gold Jap thread.
The final touch was to attach our late mother’s wedding ring, which appears to have been ‘caught’ in the net.I have to admit I am very proud of both my sister and my stole!